That was the day that two years of rigorous weed-out Premed classes, one entire summer in an insane prep course, and one month of shutting myself in my room taking practice tests would come to a head. That was the day that I would face the infamous MCAT, the test that had ceased to merely be an examination and had become instead some kind of malignant entity, the destroyer of dreams.

Was it odd then that I didn't feel nervous at all? In fact, I felt strangely exuberant. I felt confident, prepared. I was hitting my target score on all my practice tests, I felt like I had a firm grasp upon the content, and it seemed like I had the test - with all its tricks and nuances - all figured out. On the day of the test, I actually had a spring in my step, feeling invincible. When I entered the testing center, I was a stark juxtaposition to the rest of the test-takers, who seemed like they were all mourning the death of a loved one. In the dimly lit room, they all wore frowns, heads bowed down. I, on the other hand, was actually beaming. I was FEELING it, ready to do amazing on the test, ready to...well, I was wearing this shirt, making it clear exactly what I was ready to do. 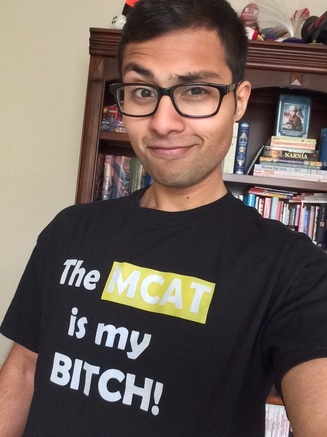 So it should have come as no surprise when everything fell apart.

20 minutes into the first section, my computer froze. I thought nothing of it as the test resumed, but then one of women working at the testing facility burst in and shouted "Oh my god, this is a disaster! I'm so sorry that this happened, but what can we do when there's a power failure. I'm going to have to restart your computers. Your tests will resume from where they were." Of course, the entire time I'm sitting back and listening to her make this announcement, my test is still running. So I scramble to continue taking the test, but because of the disruption I lost focus and lost time, and couldn't finish all the questions.

I went to go make a complaint during our break, but the women in charge said that there was nothing they could do. They told me I could not take the test, to which my reaction was amazement. How could I simply not take the test which I had studied for so long and so hard for? I had paid to be here, I was going to take the test. This turned out to be a huge mistake.

More troubles plagued the testing process. In the second section, the test jumped to the very end. The computer thanked me for taking the MCAT, and I'm like "I HAVEN'T EVEN TAKEN HALF OF IT YET". They had to restart my computer when that happened. Then, in the final section, the power went out in the entire facility, causing us all to wait to have our computers and tests rebooted. All in all, it was the most un-standard testing environment ever, the worst possible conditions in which to take a test which was going to determine our future. Every single person in that room was on the verge of tears while taking the test, frustrated and irate. By the time I finished the test and left, I was angrier than I had ever been in my life.

Matters only became worse when I came home and found out that because I had finished the test, my score was going to count no matter what. If I had just walked out, then I would have been eligible for a full refund or a free retest. This was completely unfair. How was I supposed to know such a policy existed? How could they expect me to come to the test prepared for the full power of Murphy's Law to strike me?

I wrote a letter explaining my situation and asking that my score be voided. This is the response I got.
So all I could do was wait for my score and hope for the best. I am proud of the way I handled the situation emotionally. I really only kind of lost my bearings that first day after the test (I really shouldn't have been allowed to drive myself home). After that, I was pretty cool and calm about it. I was still very frustrated, but I dealt with in a mature manner. I didn't let it get in the way of my school work. Life had to go on, and I was determined to maintain the positive attitude with which I had started off the year. One thing that helped me vent my frustration was talking to friends and family about it, and also doing some writing. Here's a short story I wrote inspired by the incident, although perhaps inspired is too weak a word: to call it a  "thinly veiled" representation of my experience would be too liberal a description.
Finally though, my score arrived. I was disappointed, as was expected, because it was two points lower than my target. Given the circumstances, I should have been grateful that it wasn't worse. I decided to consult my Premed adviser to determine if I needed to take the test again.

And after all that emotional turmoil, I was absolutely surprised when the entire MCAT debacle concluded on a really happy note. I thought my score was a little better than average at best, but she told me "This score will open lots of doors for you." I was blown away. I was simply happy that the score was good enough that I didn't have to go through the process of taking it again, but to know that I had done well enough to be competitive (especially under the circumstances in which I took the test) seemed like nothing short of a miracle from God. Part of me was a little bummed. If I had done this well under the terrible conditions I took the test in, it made me wonder how great of a score I could have gotten in a standardized setting. However, I didn't dwell on those thoughts for very long because they're simply not constructive. The most important thing was that I was done with the MCAT. I could take pride and find happiness in knowing that an enormous hurdle along my path to medical school had been cleared away. It's an incredible feeling to have medical school so close within my grasp.