I had been meaning to join the Leadership Team for the Health Scholar program at Swedish for some time, and summer seemed the perfect opportunity to do so since I would be free of academic obligations; this way I could get a feel for the responsibilities associated with my new position and ease them into school work when the time came. After asking around some of the people already on L-Team, I decided to apply for a Department Coordinator position. As a DC, I would be responsible for managing the Health Scholars on a particular floor, preparing their schedules for each month and being their point of contact to the program. I would also be responsible for rounding on the floor, interacting with the nursing staff to make sure the program participants carry out their duties with diligence and integrity. On top of DC duties, as an L-Team member I would also be expected to help train incoming cohorts of Health Scholars, interview prospective Health Scholars, and perform various administrative tasks as needed.

Determined to get the most out of the clinical internship, I submitted the following application:
PUT LEADER GOAL SHEET HERE
In all honesty, I don't think participating in this program would have been completely worth it if I hadn't joined L-Team. Being in a leadership position for the program has opened so many doors for me, and allowed me to grow professionally in a way that I hadn't foreseen. Although L-Team had been billed as providing that opportunity, I took that for granted. Yet, it was clear immediately how profound the position I had was. The level of professionalism that is expected on L-Team was unprecedented. The standards of business, from attire to mannerism, was unlike any that one would anticipate in a volunteer position. It definitely feels like I've been hired by a corporation, and I have to constantly think about how I am going to maintain the high standards set by our Program Managers and fellow L-Team members.

My personal responsibilities also provided a great deal of personal growth. I had to learn all the tools of the trade fast: sending out e-mails, using the program's intranet, coordinating schedules within the floor, running Department training, logging hours, and maintaining oversight of the floor. It was an influx of duties that took some time to adjust to. But I quickly became adept at performing my duties and soon came to really enjoy it. I love checking my e-mail every day and interacting with the Health Scholars, passing along my tips and getting their scheduling needs taken care of. It's the kind of meticulous work and social work that I find really engaging. Plus, the floor I'm responsible for - the Oncology Unit - is one that I had just wrapped up volunteering on myself, so I was very chummy with most of the nursing staff. They get a real kick out of seeing me when I come to round on the floor, dressed in business professional attire. Some of them are shocked (one nurse even thought I'd magically become a doctor), and others teasingly call me "Big Boss Taj".

Of course, it's not always peachy. There was one incident in particular that was a great learning opportunity for me. One of the Health Scholars on my floor had to reschedule a shift last minute, but didn't come forward with a valid reason initially. When I called him out on it, he confessed, and I let it pass. However, apparently he took some issue with my tone in the e-mail I had sent and complained to the Program Manager. As it turned out, this Health Scholar had had a history of creating tension with his Department Coordinators, and would often behave unprofessionally. It's not that he was a bad person or a poor program participant, he just had a bit of an ego. I discussed this with the Program Manager at length, and we decided that while I wasn't in the wrong here (it was mostly his unprofessional attitude), I should be more careful in the future about crafting e-mails and being wary of my tone. In the end, I made peace with the Health Scholar in question. It's regrettable that such an incident occurred, but I came out of it being more mindful of how to navigate these situations and how to prevent them from happening.

Probably the best part about being on L-Team though is the L-Team itself. As simply a Health Scholar, it's kind of just you by yourself. There are monthly All-Scholar Meetings where you meet with everyone, but you hardly have the opportunity to build a strong sense of community in an hour spent mostly listening to program updates and having cursory conversations with people you'd met during training. But on L-Team, that's completely different. Everyone on the team is so fun and friendly, and because we meet often and have to work together, we bond really well. It's kind of like a little family within the program, and I was touched by how fast I was brought into the fold. I also got to know my Program Managers, Marika, Erin, and Derrik, super well, something that would not have been possible if I hadn't made the jump to L-Team. Without joining, I would have been lost in the program, just another face in the crowd quietly completing my hours. As an L-Team member, I feel like a vital part of the program. Plus, it definitely has its perks. Aside from having stronger relationships with everyone in the program, I have a great deal of liberty within the program as well. And I get invited to free breakfast for special events, like the launch for the Making Strides Breast Cancer Awareness Walk! 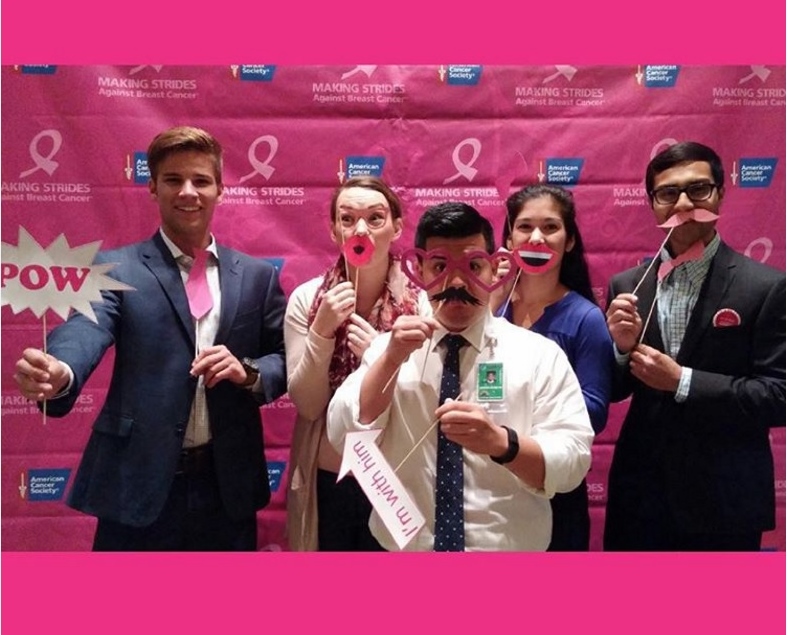